[SOLVED] I'm a goof, sorry for posting this so hastily. I didn't realize there was already newer versions of GZDoom available (lesson learned, I'll check that first next time). GZDoom version 3.4.1 appears to have fixed this bug. A mod can delete this thread if they'd like. Again, sorry.

Hello everyone, I've been working on a map that uses the interactive linedef portals (Action Special 156 in Doom 2 UDMF), and I've hit a snag that I don't understand at all. I've created a small, simple demo map that duplicates the scenario and problem (a download link for the demo map is at the bottom of the page).

First, I'll attempt to explain/show how the scenario (and the glitch I'm getting) actually works: 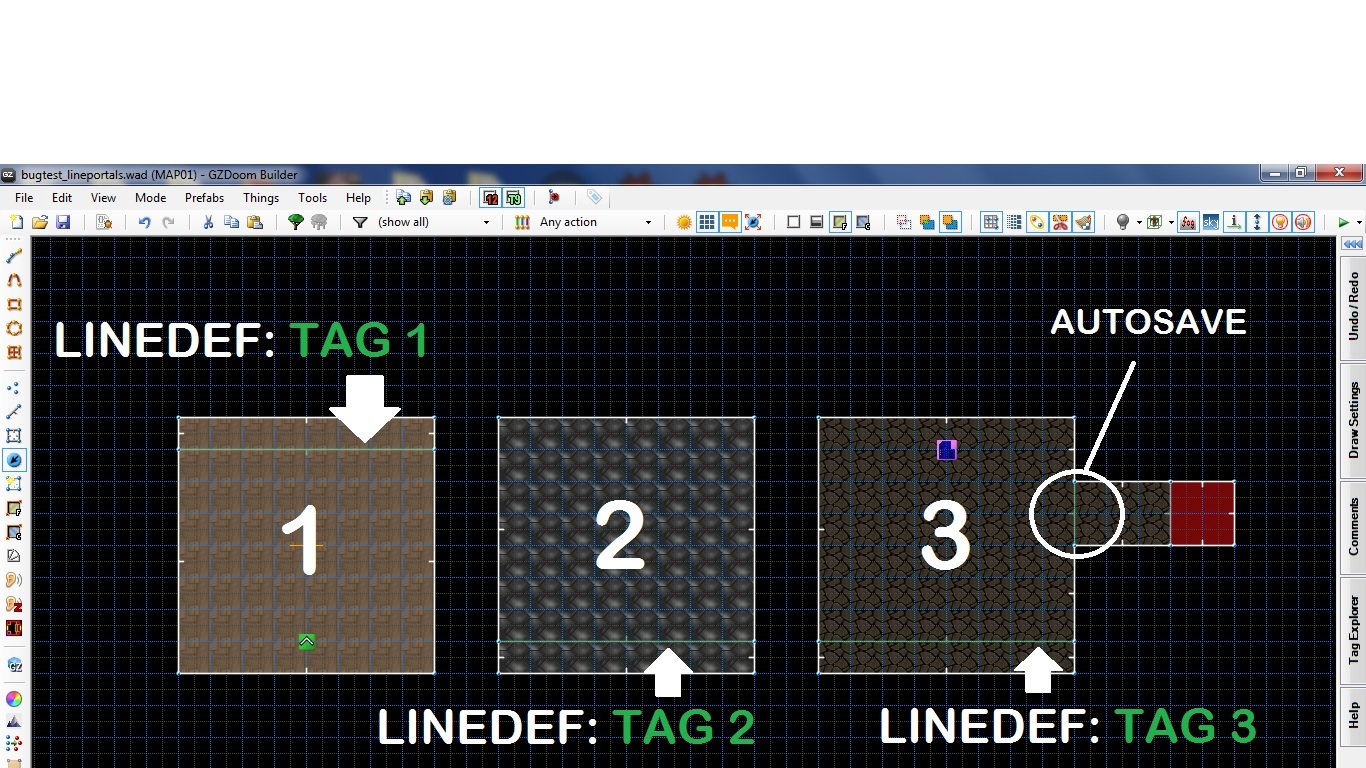 Now, this whole process works fine and dandy. But here's the catch...

So, you're in sector 3, you've picked up the key and the script has been executed - but then you die! Well, if you've made a save game after picking up the key and calling the script, for some reason, the interactive portals are now broken. You still have the key, but the changes called in the ACS script don't seem to fair so well. First of all, the visual aspect of being able to see between the sectors is gone. Second of all, while the interactive aspect of the portal still *functions* (I say that dubiously), it portals you into the wall in sector 2, where you're now stuck.

You can test this scenario (and strange glitch) for yourself in the demo map below. You can run from sector 1 to sector 3 using the interactive portals, grab the key (call the script), and then run back through the portals into sector 1. Restart the map - but this time, after you grab the key, cross the linedef with the autosave, and then step into the red square which will insta-kill you. When you reload at the autosave point, you should see the problem. You'll still have the blue key, but the portals won't work correctly anymore.

I'm hoping someone might be able to shed some light on how/why this is occurring. I understand how much simpler my life would be if I just ditched the whole interactive portal gimmick, but it's an aspect to the map I'm working on which I would love to preserve, if possible. Thanks in advance for any help or suggestions. Have a great day!

If this information helps:

The map is being built using GZDoomBuilder 2.3, in Doom 2 UDMF format