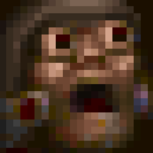 Trouble with teleporting enemies in maps