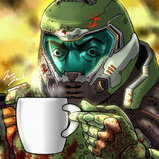 How do you make a music wad for wadsmoosh?

Hello my name is coldroll and I just joined this site today after lurking on here for the past few months. Anyway I'm trying to make a music wad as a total replacement of the classic doom games music (Doom,Doom2,Final doom/plutonia) that would work with Wadsmoosh since I took all of the official doom wads and used the wadsmoosh utility to make them into one game. I'm trying to use the Ps1 doom music and the ps1 final doom ambient tracks with wadsmoosh and the ps1 music pack works fine but the final doom ps1 music doesn't work since it requires you to use the final doom tc mod in order to run the music. Another issue I'm having is how can I find out what the music tracks in the doom games are called so I can replace them in a new wad file. I'm using Slade but I only have very basic knowledge on how to use it I've taken all the mods I've downloaded as wad files and converted them to pk3 files for instance,and I've replaced music files in other wads I've downloaded but I'm trying to figure out how to do it from scratch. Anyway hopefully somebody could help me because I've searched the internet and haven't found any ps1 music wads that are compatible with wad smoosh. I prefer playing doom with the dark ambient music of the ps1 music over bobby princes soundtrack I also haven't seen any ps1 final doom soundtrack wads either but I do have the original ps1 music.

Here are the links to music packs I've downloaded that I'm trying to get working with wadsmoosh. Note the final doom sound track mod only works with a tc of final doom that emulates the ps1 in gzdoom.