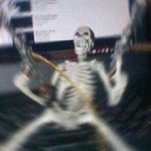 My take on some of Doom Eternal's lore shown so far.