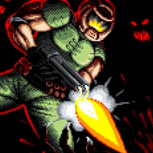 If you could buff anything in Doom, what would it be? (Discussion Post)