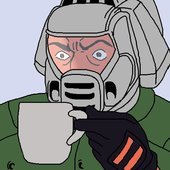 What would you think could have a good crossover with Doom?

By TheDoomDude, September 12, 2019 in Doom General