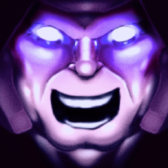 So I Recently Bought a Doom 2 Big Box Any Suggestion as to taking care of it?

By BabyGiggles, September 17, 2019 in Doom General