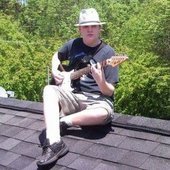 Has anyone turned Classic Doom into Doom 2016?

By Mechaghostman2, November 2, 2019 in WAD Discussion