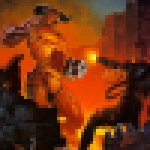 Question about doom 3 for cd/