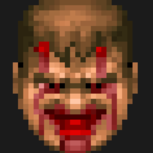 Does anyone think that DOOM 64 sucks?