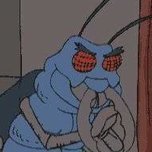 Crushing ceiling that only goes down (Doom 2)

I'm a bit unsure about this - are there any ceilings that go down, crush things that can crushed and then never go up? I got the impression that they all go up. I think floor will never go down from smashing into ceiling, but that's not what I want right now.

13 answers to this question