Hello, I'm pretty familiar with importing and converting textures to Graphic (Doom) and Graphic (Flat). I'm using Slade to edit my wad file. Inside of my FF_START to FF_END markers I currently have 9 Flats. Whenever I attempt to convert a newly imported graphic into a flat, the lump instead becomes 'unknown'. I have tried different names and graphics (all 64x64 of course) and I always end up getting the same result. I even deleted some of the existing flats and added new ones in their place and I'm always able to convert 9 flats before this issue occurs. I suspect this is a problem with the structure of my wad file or perhaps the naming conventions used for some the of lumps but I'm just not sure. I'd greatly appreciate some help, thanks! 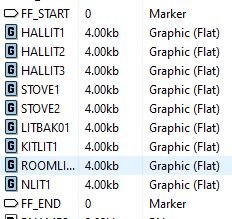 Update: I created a test wad file with just the FF_START and FF_END markers where I tried to import and convert some PNGs to Flats and I'm getting a similar result, except in the case, I'm unable to successfully convert more than 2 PNGs.

There's certainly something wrong with my approach, I'm just not sure what.

Solved: Boy, do I feel like a moron after this. Closing and re-opening Slade fixes the issue. Previously 'unknown' lumps resulting from the conversion are fixed and become flats when re-opening the wad file after saving. I imagine this thread is kind of pointless and no longer needed, I'd appreciate it if an administrator would delete this thread, thanks.