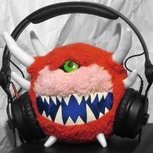 No Rest For The Living - Community MIDI Pack (RELEASED)

By Peter, January 21 in Doom General