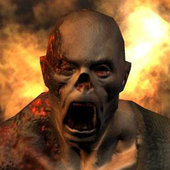 Does Doom 2 have any significant engine improvements ?

By incel, February 10 in Doom General