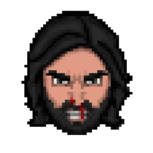 If you could add one single demon to Doom, what would it be?