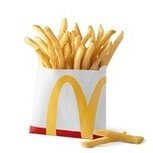 By Side-O-Fries, May 5 in Doom General