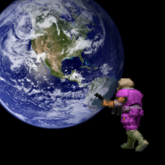 By Plank_Guy_89, September 20 in Everything Else