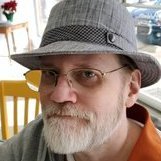 Earworm Thread - What Song Is Stuck In Your Head?

By leejacksonaudio, September 22 in Everything Else