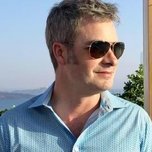 Playing through Punish2.wad 28 years after making it

By DCasali, October 8 in Doom General