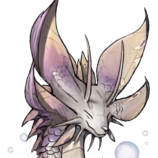 By CaelThunderwing, November 22, 2021 in Doom General