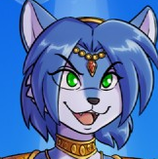 By Mr. Freeze, June 24 in Everything Else