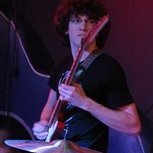 Wouldn't eternal bliss get boring after a while?