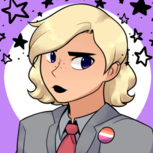 It Came From Beyond the Kuiper Belt