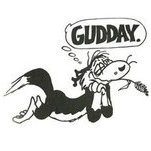 RELEASED; A World in Strife: Raiding the Dam