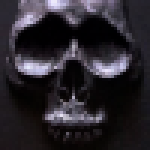 Who else uses inspiration from Doom II levels?

Do you do this?