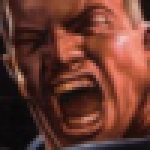 By DarrenGrey, November 24, 2016 in Doomworld News