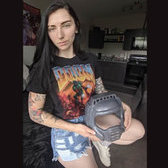 There will be more Chillax, but not plagiarized.