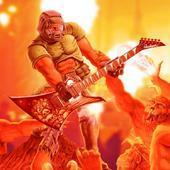 Is it possible to change sound effects on PSX Doom?