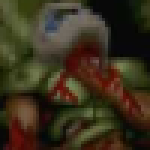 Beyond the Grave Wolf4SDL TC RELEASED