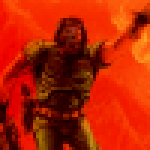 Patches and Fixes pack for the Doom family in Zdoom